The Thing Around Your Neck 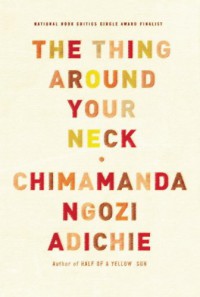 There are a lot of reasons why these stories were each amazing and beautiful. For starters, they are #ownvoices, which in itself lends depth to them that is hard to come by from people not familiar with others experiences, but the stories are also varied in many other ways.

I remember first hearing about Adichie from her TEDtalk, the Danger of a Single Story, so I knew not to expect the stories to be similar to each other or to any idea that I had about Africa or African people. Each one is a different part of life for African people. I know that several stories were about Nigerians specifically, but not whether all were. I know Adichie is Nigerian (yes, I even looked up her Wikipedia page to double check), but I don't want to make either assumption that it means all her characters must be Nigerian nor that the experience of people from different countries within Africa are interchangeable. Instead, I'll just point out that I don't know. I do know that one story pointed out where secondary characters were from and the protagonist even refers to them by their country more than their name as they are all new to her.

Getting back to the way the stories were varied, some were immigration stories to the US and others took place in Africa, but even one of those could be loosely categorized as an immigration story because it is about a woman attempting to obtain refugee status to go to the US. It would be difficult to judge the stories against each other on a level of enjoyable as not all are happy or sad, but they all make the reader think about their ideas of how they treat people and how they are treated by people.

I was glad that I listened to the audiobook, read by Adjoa Andoh, because of the character names. Not only would I have mispronounced, but I would have missed out on the lyrical beauty of many of them. The many accents required to read through all the stories were masterfully done as one should expect from an actress of Andoh's accomplishments.

Altogether, it's an enlightening set of stories that should definitely be read by anyone interested in stories about the lives of women. This does not mean that it should be relegated to "chick lit", though. None of the stories are delivered in the "humorously and lightedhardly" style of what is often referred to as chick lit. These are serious stories about women's lives, the struggles, the many forms that heartbreak takes, the difficult decisions that must be contended with. While I wouldn't use the book alone to indicate what African or Nigerian culture is completely about (then we'd fall into the narrow view that Adichie herself cautions against), I would say that it paints an interesting picture of what it is like for some women.

So again, an excellent pick for anyone interested in women's stories, particularly those looking to expand their reading to include stories in more than one country, of moving between countries, of the way lives mix between people of different cultures in several ways. The collection on its own, it still expands the idea of what African stories are and takes us a beyond a single story.