Girl Rising: Changing the World One Girl at a Time 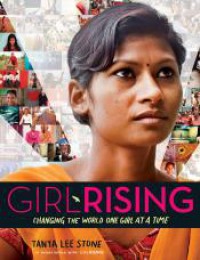 This is an incredibly informative book on an important issue all over the world. It's a quick read for anyone interested in brushing up on the subject and getting involved.
Most of the information wasn't new for me as it was also mostly covered in Half the Sky, but it was sorted and presented differently. First of all, this is based on a documentary, so the author knew that much of the information had been presented before. She chose to focus on some of the finer details of the situation rather than the overarching themes of why girls aren't getting educated. She starts with the stories of the individual girls seen in the documentary and then widened the view to show that their situations are representative of the issue in their country or region.
The other benefit that this book has over Half the Sky is that it is predominantly uplifting. Each of the girls mentioned and who the reader gets to know has found a way to school and is flourishing. The author mentions that they are the lucky ones, and that more needs to be done, but she doesn't leave the reader with the feeling that it's too big to hope for there ever being a resolution. That may seem a little less realistic to some or like there is false hope, but it depends on the reader.
The book is clearly targeted at a younger reader and as a started into the issue, so she's probably banking on the reader not having read anything like Half the Sky yet. As a starter into the issue and a book that focused on education alone (the other one has a whole host of women's issues that it discusses), it's fanstastic. It introduces the problem well, it gives the reader someone to relate to in order to inspire the reader to help with the problem and then it even gives possible ways for any reader to help with the problem. I wouldn't recommend it to someone already familiar with this issue only because it would be redundant. On the other hand, it'd be the first book I mentioned to someone asking about the importance of educating girls worldwide alonside their brothers, especially if that person has a tendency to want to help with things they are informed about.
The ways to help aren't perfect and are centered around the reader being a youth or student. They aren't necessarily fit for everyone, but they are options to get one thinking about what can be done. They are small steps to take in that direction.