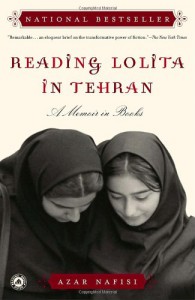 This is one of those books that comes along and turns everything you thought you knew upside down. I loved every minute of it and can't wait to read more from Nafisi.

She manages to do so much in this book. It just amazes me. She makes me want to read everything over again (except Lolita which I read for the first time in tandem with this and am so grateful that I did. Here's the review for Lolita), and to teach literature, and to have my own group where we can dive into all these books together. Unfortunately, all these things are incredibly difficult to come by or create and I can't imagine how she managed to do it in Tehran, of all places.

Okay, to be fair, I don't have to imagine, she details it in the book. Other than Pride and Prejudice, I wasn't a fan of any of the books they so loved in their courses and most I had already read for my own English degree, again the exception is Lolita. That said, I really have to go back and reread them and appreciate all these things that I didn't see on the first pass. I absolutely loved the Gatsby trial because it also made clear for me the things that are amazing about the book and made sense of it all. A problem that I have had with classics like that one and Great Expectations was that the women were so unreal to me. I had never met nor knew of a woman in real life like any of them. It had not occurred to me that these are only the impressions of the male protagonist of what these women were like. Even when it was once pointed out to me, I was horrified and couldn't bring myself to really believe it. Surely, men don't actually view women the way that Pip viewed Estella, but I was assured that many do. This did not help me like that particular novel, but it helped me understand Daisy in The Great Gatsby when that same thought process was pointed out here.

I think the difference is the timing and the impression that was left. Like with Madame Bovary, I remembered the highlights of the The Great Gatsby and the feel of the book but not an excess of details. I could remember that Daisy was always seen as the embodiment of everything desirable and wonderful by Gatsby but not why. It helped my impression of her that she loved him, though it left me confused when she chose to leave him at the end. Nafisi does help clarify this when she supports the idea that Daisy in the book isn't always interpreted adequately by Nick, the narrator, which is why her actions can be confusing. The same would have been true for Lolita, who is seen entirely through the eyes of HH, had I not read the section about Lolita here prior to getting into the meat of the audiobook. I could see through HH's interpretation and make my own interpretations of the same actions, something I couldn't manage with Daisy or Estella. I mentioned in the Lolita review that it really makes me want to do a reread of both and I'd throw Daisy Miller into the mix now that I've read her section in this book as well.

Madame Bovary I had already learned to appreciate shortly after starting this blog because it prompted me to think a little more about the context than the story and that she is such an unlikeable character for me. Once I got over the idea of judging her for her actions, I remembered to appreciate that she is a fully developed character, written like a real woman with reasoning for her actions that I can understand and even empathize with while disagreeing with them and that she was written by a man over a hundred years ago. She was written in a way that see beyond all the delicacy that we are attributed into the people that women are and that we can have our own ambitions and desires. She's a precursor to all the amazing women in Game of Thrones who finally got me to like fantasy because there were real women going through stuff and messing everything up and making mistakes and getting it done. Because of this, I could just nod and agree on Madame Bovary though I didn't think she was discussed quite as much as some of the others.

I knew going in that this was a book about other books and that it took place in Iran, but I had managed to ignore when this class took place. Thus, I was not prepared for how much the book was going to be about the war between Iraq and Iran. The amazing interpretations that this time and place give to the interpretations of these books are reason alone to read this, and probably the primary reason to do so, but Nafisi also does the reverse and interprets the world through the books, adding a depth to her memoir that I hadn't expected. The timing of the class gives Nafisi and her students certain insights into these books but the books also give them other insights into their time and place.

Each book made them see something different in their world the same way their world made them see things in the book that I overlooked. Something as simple as Daisy Miller and her actions are taken entirely differently when one also lives the heavier restrictions that are placed upon women in some parts of the world. It's easy as a reader in the US now to just see Daisy as being a little slutty and forget that she is lashing out at society. I certainly missed it. I also missed how such simple actions work to begin the breakdown of societal restraints on our lives and free us just a little more. It's girls like Daisy that get us from where she was to where I am and I never paid enough attention to appreciate that about her.

So I've gone a really long way to say that this book revolutionized the way I think of the books mentioned and, in certain respects, the way to even read a book. That said, it is a wonderful memoir of a woman who lived through a historical period in Iran that absolutely needed documented from a woman's perspective. I am grateful to her for that as well. It is a look into the lives of women in a time and place that we often overlook women and their experiences. We fall into a mindset that women aren't doing anything because they aren't the people on the screens and given the higher priority bylines. The more I make an effort to read about women, the more I'm a believer in the hidden history of women getting it done and then having credit taken from them or their contributions covered up. We absolutely must make a better effort to know our own herstories and make them louder, make them as inescapable as the men in history are.

Women were there, women were contributing, women need to be remembered for it all.