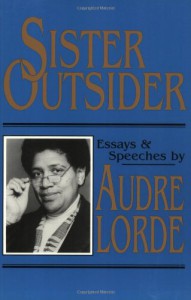 I'd been meaning to read Sister Outsider for a while but kept putting it off until I made it my Letter S read for Litsy A to Z. That's the beauty of reading challenges, they make you actually sit down and decide that now is when I'm going to read this or that book that I'd been meaning to pick up.

I was a little underwhelmed by the first essay, which is mostly about a visit to Russia. What I did appreciate about this was the acknowledgement that communism isn't the answer either. Capitalism has many issues, but I'm hardpressed to consider them lesser problems to communism, but maybe that just where I lean right.

After the essay on Russia, every essay got me more pumped. It was the perfect book to be reading while gearing up for the women's march last weekend. There were so many lines and paragraphs that have given language to things I was seeing but not quite able to fully digest, like this one:

Some problems we share as women, some we do not. You fear your children will grow up to join the patriarchy and testify against you, we fear our children will be dragged from a car and shot down in the street, and you will turn your backs upon the reasons they are dying.

It is so powerful. And it's like this over and over again with different topics.

The essay about raising a son echoed many of my own concerns about my son, who is only 6 now. I took him with me to the women's march and I hope that he's glad he went when he's old enough to understand what we were doing there. It's a concern that he'll not see it when he gets older (unless we've somehow reached equality by then but I don't see it as likely) but I am certainly less worried about the things that she is. It's a contrast that must be remembered when we choose what to take a stand.

Much of the book brings about questions about how the treatment women of color. It makes me more aware of the fact that sometimes I could hurt things when I'm trying to help. It's a reminder not to speak for women of color but to find ways to propel their voices.

It did tweak me a bit that Lorde consistently neglected to capitalize America, but I get it. By tweak, I do not mean annoy. It's a style choice and it makes it's own statement. It did it's job to demonstrate the demotion in importance of the country as opposed to the black population, as she consistently capitalized Black when talking about the population. I understand it, though you can see that I can't quite bring myself to do it. It is one of the subtleties of an essay written by a poet.

As mentioned in my TTT on Tuesday, I already know that this is one of those books whose sentiments will not leave me any time soon. Since the first time I poked a toe into the world of what feminist politics mean and what they mean to me, the divide between white feminists and black feminists has been a point of contemplation and discussion. The terms perturb me and I more often call myself an intersectional feminist, since I am neither black nor completely white and my ideals don't completely line up with either. As Lorde indicates, though, we do not have to completely agree on all problems, how to handle them, or how to prioritize them in order for us all to work together as feminists. But we do need to remember both our differences and our similarities to do this adequately.

It's hard to have a "favorite part" in a book like this, but it is this paragraph that my mind keeps coming back to as the sentiment that I've seen in many places about integrating the rest of the population with the white feminists that seem to so often forget everyone else in their climb to parity with men:

You do not have to be me in order for us to fight alongside each other. I do not have to be you to recognize that our wars are the same. What we must do is commit ourselves to some future that can include each other and to work toward that future with the particular strengths of our individual identities. And in order to do this, we must allow each other our differences at the same time as we recognize our sameness.

Given the many women of color that I saw in DC on Saturday, I hope that we are already doing that. But I know in herstory that women of color help to propel the voice for the cause and then get shut out of it once the men are at the table to negotiate. We must not let it happen again.

This is one of those books that all feminists must read, that women in general should read, and that would be a great addition to any course, conference, or book club or anything on social justice in general or feminism specifically.