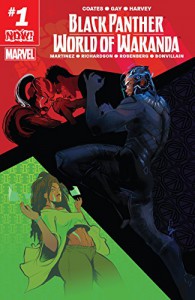 I have been excited and anticipating this ever since it was announced that Roxane Gay was going to be a writer for this comic and it did not disappoint.

It's only one issue and I don't read Black Panther, so I  was a little lost going in. I'd had no previous knowledge of the women guards and warriors of Wakanda, which might be one of my favorite things ever, and I had no idea who Zenzi is or what her future significance may be.

I usually prefer to read volumes because a single issue like this is such a TEASE. It introduces the characters mentioned above as well as some others, who are all interesting and the players all seem to be in place for the plot that is to come but now I have to wait a whole month for the next installment and the wait is going to drive me nuts.

Okay, I'm gonna take a second and grab some air and then we're going to  talk about this issue.

Art - of course, I love the art. I love the way the women are drawn. Beautiful and sexy but not sexualized. That may seem like splitting hairs, but there's a difference. The face tattoos on Captain Aneka are gorgeous and I love her training outfit, though I'm not sure how functional a bandeau top is during a fight, even in training. The trainee outfits I totally get though. I also appreciated their musculature. I know some comics overdo it but these women are fighting to be elite warriors so they're probably gonna have some superior musculature. I found the many different styles of dress and hair interesting and gorgeous. They're quite different from what we're used to seeing in the US, but this story doesn't take place here, so that was obviously appropriate. Being nowhere near an expert on African styles, I'll leave it at that.

Story - as I mentioned before, I had no idea who the Midnight Angels or any of the people mentioned in the back cover were, so I didn't really have any expectations about how the characters would interact. I don't want to spoil it for others like me, so I'll say that I found it an interesting relationship to have in a book like this. Also, the whole concept of the Dora Milaje and the sisterhood is just awesome. I was a little lost when there were mentions of some war between the Avengers and the X-Men came in. That whole scene had me lost and I wasn't really sure where it fit into the bigger story or if it's just meant to place the timing of Ayo's training.

I really appreciated the map coming into the piece on Zenzi. At first, I thought it was really a part of the comic, but then I realized it was the "backup story" mentioned in the back cover info. She's an interesting character and I can't wait to see how she plays into the World of Wakanda storyline.

I really enjoyed this comic and will be anxiously awaiting the next installment!