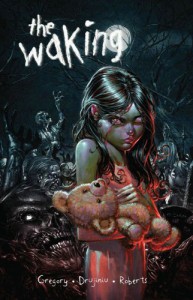 Between the awesome concept and the irritating depiction of women, this was a hard one to rate. Honestly, I didn't expect that second part. I would have, had I spent a second to see that Zenescope was the publisher. They always have scantily clad women who are overly sexualized. This one even has a woman who is essentially raping her husband by coercing him into having sex much more than he actually wants to. And they're all hot. I get wanting to live in a world of hot people, I really do. It's part of the reason I love shows on the CW so much, but at least dress them appropriately. Like for the situation. I get that  a girl coming out of the bath is just wearing a towel, but the aforementioned wife showing up in just a tiny dress when everyone else is wearing a coat is annoying. So was having the one female cop in a blouse that almost showed her nipples. Yes, cops can dress this way, but given the depiction of the rest of the women who speak in this comic, it's obvious that she is dressed this way for the male reader and not to depict some real cop that dresses this way.

Okay, aside from the problem with the way the women are drawn and sexualized, the concept of the comic really is quite brilliant and well done. The art and concept would have easily been a 4 or even 5 star comic for me but the depictions of women in anything less would have just left it DNF.

Still, vengeful zombies are awesome. Watching everyone figure it out was interesting. The "bum" and his daughter were just  the best right from the beginning. She's the reason I picked it up in the first place. Not just a vengeful zombie, but a little girl. How fun is that?

The story was truly awesome.