An Unquiet Mind: A Memoir of Moods and Madness by: Kay Redfield Jamison 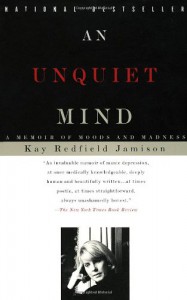 I had a good friend that was diagnosed with Manic Depressive Disorder and he's the biggest reason this book called out to me when I saw it. I always wondered what was going on in there and what the manias and depressions felt like. I always thought that understanding would help me interact with him in those states and not agitate him or exacerbate problems. I don't really know, though, he went off the grid after a particularly bad struggle with the whole evolution, of which I was in his circle, and then returned suddenly to social media, having moved away and found a better way to deal with it all then we could have hoped for.

I thought of him as I listened to the audiobook and Dr. Jamison explain her experience with this same disorder. I worked through all the behaviors that had been mania and depression and the way he never understood the way the medicine was improving his ability to deal with it.

As audiobooks go, this is a rather short one. It's just under three hours and eloquently describes the ups and downs that go with this disorder and the way that it progresses during her lifetime. This isn't remembering just one evolution but several as well as the fears that accompany letting others know that she has it, that she might pass it on to children, having dealt with a parent with this disorder. She includes the feeling of the mania and the aftermath, which is more than the depression that follows it. There are inevitable consequences in life for those things that are done in both manic and depressed states. She doesn't shy away from sharing those. But there is also healing and more to healing than medication and more to taking medication than simply being prescribed it.

Above all, I appreciate that she shared it all and helped the rest of us understand what it is like to be the one that lives with the disorder. It's a beautiful book.